The island of La Maddalena (Sardinia, Italy), with all the military structures that contains, has not been thought sufficiently sure in order to protect the "Big" of the Earth in the occasion of the G8: probably, the threat of many no-global that they attacked it in mass – disembarking from their small boat – has preoccupied admirals and generals, to succeed to resist the shock wave. After "Atlantic Fortress in 1944", "Sardinia Fortress" could collapse.
Therefore, all in a city that it has as soon as endured a devastating earthquake: auguries Mr. Obama, auguries Mrs. Merkel. If, the night, the bedside table had to shake, you do not preoccupy yourselves: until magnitudo 4,5 the evacuation is not previewed, slept calm and sure, you are in Italy (!).

You will have asked yourselves about the unusual choice – but you know a few Italy – therefore is better to explain what – we are sure – you have not fully comprised.
You must know that, in this Country, every day of the year – from decades – goes in TV on all the television channels the "Berlman Show", that is the narration of the Italy seen from a single point of observation, that one of the First Minister, Silvio Berlusconi.
In this institutional soap-opera, the Italians are happy and calm people, than they does not have worries for the job, for the health, the instruction, the welfare. The State – that is Silvio Berlusconi in person – is preoccupied of all and for all: after whirling nights passed in the harem, Berlusc-al-Sharif – our national Caliph – observes from the window, observes Italy and dictates the script of the next reality show.
From Milan – where there are its, personal televisions – to Rome, where there is the television of State who controls because is the First Minister, its employed write diligently the script, they telephone to the actors and they prepare the scenes that the Italians will see the following day.
I know that, in yours countries, would be not even imaginable: indeed, in its classifies, Freedom House inserts Italy – for freedom of information – more or less from the parts of the Benin or of some dispersed Banana’s Republics.

Thoughts that, in Italy television, nobody speak about our main problem: a third part of Italy is governed from the clans of the Mafias, than now do not manage only the criminal activities (drug, weapons, etc), but they insert themselves in the publics contracts, as Roberto Saviano, in best seller “Gomorra”, has explained. In order to have explained it, it has had to escape and living hidden.
Italy – the Country of the Sun – does not have practically solar central and – while in your Countries there are many initiatives that regard the new energies – in Italy we will manufacture (after the 2020!) four nuclear central: with the price of the Uranium in continuous, hyperbolic increase, will be probably the last centrals of the Planet.

In order to it, makes you to understand as the "Berlman Show" is taken care just of all, we want to explain something to you, that it regards a story you will have read on your newspapers: the famous vicissitude of Noemi, the under-age girl who attended the "parties" of Silvio Berlusconi.
A few days after the scoop, was published an interview to a Neapolitan boy – Domenico Cozzolino – which he told to have been the boy-friend of the girl for along time. In some way, the boy wanted to make to mean that Noemi Letizia was a normal girl with a normal life.
Little after, but (in Italy, we say that "the lies have the short legs"), discovered that this boy was an actor who worked in a fiction of the TV of Mr. Berlusconi – Uomini e Donne ("Men and women") – managed from an anchor-woman – Maria de Filippi – wife of a journalist who manages the most famous talk show of the TV of Berlusconi, Maurizio Costanzo. All “made” in family.
When the wife of Berlusconi – Veronica Lario – ask the divorce, immediately a former parliamentarian of the party of premier Berlusconi – Daniela Santanché – in an interview to the weekly magazine of gossip "Chi (Who) " – property of the Prime Minister (!) – in which it asserted that, for a long time, the wife of Berlusconi had one affective relation with a body-guard. Which, has refuted with disdain, defying anyone to try the contrary but, at this point, the message had been inserted in the circuit of the television.

You will have see the beautiful "The Truman Show", with Jim Carrey, where the happy life of a medium American came on purpose created like a model for the Americans.
Here, in Italy, in the "Berlman Show", every day they come created tens, hundreds of new images that are inserted in the circuit of the media, for to dominate the Italians and making they to believe that all it goes well: a nation of lobotomized.

In the meantime, the economy is collapsing: all the economic parameters indicate that Italy is going to bottom, but a few of Italians can see the truth, because the "Berlman Show" expanded itself every days. They tell that Italian welfare it is the best one of Europe – and while the people are more and more poor – that L’Aquila will be reconstructed, but do not say when: in 2032, therefore they have had to admit in the law for the reconstruction, because their bad political and economic choice does not find the money in order to reconstruct. Berlusconi think to find money for reconstruct with new lotteries (!): it is not a joke, is all writing in the official decree of the Italian Government!
In order to resist a similar game, the premier it must grant important places to those who make part of show: if you will try Michela Vittoria Brambilla on Youtube, you will find the Brambilla “journalist” in the site “hard” of the Spanish night. Today, this person, is the Italian Minister for the Tourism, one of the more important ministries for Italy, tourist nation.

You will ask yourselves because the opposition, in Parliament, does not denounce it: sometimes, they do it, but it cannot make null against a media-show that infuriates 365 days at year, from six national television more those minors. The information, is totally in the hands of the premier.
The necessity to move the G8 from the beautiful island of La Maddalena, in Sardinia, to a city, (L’Aquila) – where the risk of other devastating earthquakes runs – it’s only one: since there are, for necessity of public order, many military in the zone, this guarantees the manager of the "Berlman Show" that nobody will succeed to approach itself, than nobody will be able to send to the foreign country the images of the protests, than there will be sure and be many.

Italy, like European nation, is only a colossal fiction, a large reality-show, like in no other place to the world: perhaps, if you come in Italy for holiday, you do not notice any but, for people that live here, is only a crawling dictatorship, regulated from the television of the Prime Minister. More simply, one dictatorship masked.

Thanks for your attention

No copyright, with citation of the source
Pubblicato da Carlo Bertani a 12:19 PM 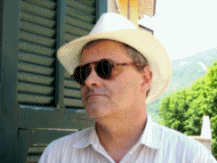